The Nedre Dalälven region, with its flood-prone floodplains, has long been known for enormous and recurrent mosquito nuisance problems. One extraordinary “mosquito-summer” happened to be in the year 2000, the same year as Martina Schäfer and Jan O. Lundström collected mosquitoes in the area for a study on mosquito diversity in different types of wetlands. The enormous numbers of mosquitoes were thus documented for the first time, and the mosquito species causing the nuisance were identified. Media reported on the situation and the floodwater mosquito Aedes sticticus became famous in the whole country, and got names such as the “monster mosquito” and the “attack mosquito”.

The local people were desperate for help since working outside, or just being outside, was impossible due to the unbearable mosquito nuisance, and the children had to spend their summer vacation inside the house. The Minister of the Environment, Kjell Larsson, visited mosquito haunted villages in the summer 2000 and his words became legendary: “You can’t have it like that”. This was the beginning of the project "Biologisk Myggkontroll" (Biological Mosquito Control) within seven municipalities of the Nedre Dalälven region. Mapping of breeding sites close to the villages Österfärnebo and Tärnsjö commenced in autumn 2000, and in summer 2001 the application of VectoBac G by helicopter was tested in wet meadows and alder swamps. Since 2002, we perform professional floodwater mosquito control using Vectobac G applied by helicopter. In the initial years, only Sandviken and Heby municipalities were included, although more municipalities along the River Dalälven needed help. The area for floodwater mosquito control was gradually increased over the years and now include 7 municipalities; Sandviken, Heby, Gävle, Tierp, Älvkarleby, Sala and Avesta, in four counties. Since the summer of 2016, also the municipality of Hedemora is included in in our mosquito surveillance, but no mosquito control is presently planned.

The establishment of a mosquito control organization in the Nedre Dalälven region was greatly enhanced by the already formed association “Nedre Dalälvens Interesseförening”. The association was created in 1986 for collaboration on developing the region. In 2001, it was decided that the affiliated company Nedre Dalälvens Utveckling AB (NEDAB) should take responsibility for the administration of Biological Mosquito Control.

NEDAB has its head office in Gysinge, in the centre of Nedre Dalälven, while Biological Mosquito Control has its office in Uppsala. However, during field season we spend most of our time in the Nedre Dalälven region and have a field station in the village of Österfärnebo.

Financing is based on the original agreement between municipalities and the Swedish government with a 50:50 model. The municipalities have followed the agreement during all years. The Governmental part has come from various sources, including the Swedish Environmental Protection Agency, the Swedish Board of Agriculture and Regional Governmental sources. During the season of 2020, mosquito control is partly financed by The European Agricultural Fund for Rural Development (landsbygdsprogrammet 2014-2020), covering costs for control operations by helicopter, staff during four months as well as project administration and management. Total budget for this project is 3,300,000 Swedish Krona and 34% is financed  by the municipalities of Sandviken and Heby. The EU accounts for 48,80% of the funding. 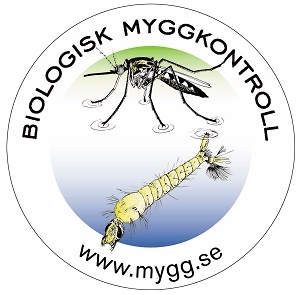